EMV, which stands for Europay/MasterCard/Visa, is a platform for integrating computer chips into credit and debit cards as well as the hardware used to interpret that card data such as point of sale systems, terminals, and ATM machines.  It is this EMV technology that allows a consumer to simply wave their credit card over a reader to complete a payment without having to swipe or hand the card to the merchant. 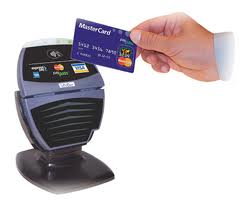 Adopted in Europe for several years now, EMV has been slow to gain traction in the US for several reasons.  Issues over card-issuers settling on a common platform as well as security concerns have slowed its roll-out.

Now there appears to be greater concerns in the US that current litigation around the Durbin amendment and it’s impact on debit networks may slow the EMV rollout even further.

We will continue to monitor the situation and let you know when we think it is appropriate to move forward with the new technology required to accept EMV-based cards.  However, for now, we’re in a holding pattern until a unified platform is solidified and litigation runs its course.  There are estimates that late 2015 will be the earliest we will see any real adoption, and a much greater likelihood the date will be far later before we see any kind of mandatory adoption.